I state my regret.

But for a different reason. This movie was good but by far the most gross film I’ve reviewed so far. Here’s why: It’s a movie about flesh-eating cockroaches. And they used something like two thousand real cockroaches to make this movie. Now, I live in the humid, stanky part of the South where these things are a real threat: no matter what you do, they try coming in if it gets too hot, or too cold, or too wet, or too dry. It is always one of these things, so there’s a routine spraying of poison around the entrances to the house. But after Katrina, that didn’t matter. So I hate all flavors of roach. 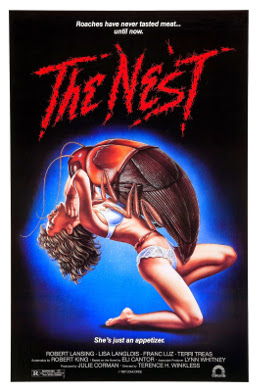 This movie is an hour and twenty-nine minutes of cockroaches in almost every scene. In the opening scene I wrote “ick” on my notes. They were just everywhere. Then they were in his coffee and I wrote “ICK”. Later it got a “!” added to the end. This movie is icky.

The basic premise of the movie hits a lot of the ingredients in our recipe: a small town (in this case, on an island), with some corrupt company doing research (in this case, on roaches), tied to the local government (the mayor, a corrupt dufus). There’s a few yokels, several of whom become roach bait, the monsters are mutated (and mutating) because of man’s interference, and we get the mad scientist (who has literally been a factor in all four movies, though in Piranha he wasn’t pure evil). We don’t have anyone going off and putting themselves in harm’s way (no skinny dipping dead people this time), because these are roaches: they bring the trouble to you.

There are a few humorous, unintended bits to this movie I wanted to highlight: one, the roach eggs in the cave look like some sort of slimy alien ballsack, and two, there’s a scene where the female lead has blood on her shirt before she gets to the barbed wire that causes the wound. Oops.

There’s a good bit of gore and some pet death because nearly the entire town gets eaten. It’s a pretty violent, icky film in that respect. But it epitomizes the genre in a lot of ways. There are a few scenes where it seemed like they were going for “idiot is going to get naked and die” but there’s no actual nudity in the film, so you can comfortably watch it with your kids/parents… as comfortable as anyone can watch mutant roaches rend the flesh from the bones of townspeople.

I cannot emphasize this enough: this movie is icky, but this movie is also a great B-movie. I might have nightmares about those little gross monsters.