Well… this is a movie. 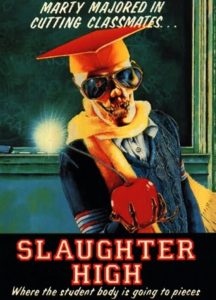 I’m not going to sugar-coat this review: We have a new Champeen, a new Worst Movie. Seriously this one is hall of fame bad, mostly because it is so boring. Seriously, this movie was hard to watch.

I give older movies a bit of a pass on their pacing, too.

This movie is also gore-y in parts, and it has some gross kills. Some of them are creative, too, which is about the only redeeming factor in the movie. The acting is bad. Apparently they’re all a bunch of British people doing really poor attempts at American accents, and as such they sound like they’re a mish-mash of different accents… from the 1940s.

Okay, so the concept is similar to the last one: It’s April Fool’s Day, so here are some jokes. The problem is that this one does such a piss-poor job of executing that. And the characters are, in addition to badly acted, horribly unlikable. There’s not a single character in the movie that has a redeeming moment, even the aggrieved nerd at the start is obnoxious beyond the pale.

So what does it have going for it? Well, the effects aren’t so bad for the time, and the kills are kind of neat in places. But against it?

The filming is poor — too much low-light that isn’t actually scary or creepy, but just makes it hard to keep up with what is going on. With the boring pacing this is a bad combination. The acting is awful, as I mentioned and will keep mentioning. There’s no reason to care about anyone in the movie.

At one point someone says “April Fool’s Day ends at noon.” What? I have never heard this.

Then someone repeats that idiocy and says “He (the killer) has followed the rules so far.” No he hasn’t, he’s fucking killing people!

This movie sucks. Unless you are a completionist who has to see every other movie in the genre, skip this. Hard pass. It sucks as much as the previous movie is good.

Report card:
Runtime: An hour and a half.
Acting: Bad.
Effects: Some are decent.
Violence: Human on human.
Dead Townsfolk: I’m not even sure.
Gun Use: No.
Gore: Yes.
Creepy? No.
Monster Type? A person.
Monster Ick Factor: No.
Funny? No.
Nudity: Full male nudity (wang and dude butt), topless female nudity.
Pet Death: No.
Pacing: This movie is boring.

Who's got the sweetest disposition? One guess, guess who?  Who never never starts an argument? Who never shows a bit of temperament? Who's never wrong, but always right? Who'd never dream of starting a fight?  Who gets stuck, with all the bad luck?  No one... but Donald Duck! ”
~Donald Duck theme