This movie is a breath of fresh air. 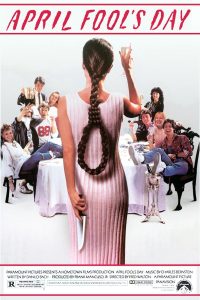 It starts with a very familiar, very typical slasher movie set-up: A bunch of youths are headed to a single, yet isolated location (in this case, the house one of their friends has inherited, on an island). Suddenly, there is a killer in their midst. Seriously, I’m fond of the recipe analogy:

– Isolated location with a bunch of youths on a break from school.
– Sudden, unknown killer in their midst.
– Having sex or taking off your clothes is dangerous.
– Creative ways to die.
– No one is really safe (except the killer and/or Last Girl)

This movie hits all of that, and hard. It’s also very light-hearted and funny — early on in the movie during a monologue one of the characters ends her little speech with “And I fuck on the first date! April Fool’s!” The April Fool’s theme keeps up through the movie: the hostess has set up several hilarious (and in some cases, very elaborate) pranks. Most are mostly harmless and a few are repeated for great comedic effect. But then, the jokes take on a more serious tone… dun dun DUN!

The acting is really good for a 1980s Slasher. There’s also a memorable face: Thomas F. Wilson, who many know as Biff Tannen from the Back to the Future franchise. He’s great in this, and I haven’t seen him in many other movies that spring to mind, so it was pretty cool seeing him in something as a different character. Also, Amy Steel (Ginny from Friday the 13th Part 2) is one of the main characters, which is also kind of cool.

There’s no real gore, just some mid-80s style goofy injuries. There’s also no nudity, which combined with the general lack of gore and light-hearted nature of the movie makes it more palatable for watching with mixed company. I mean, assuming they want to watch a mid-80s slasher movie full of death and sexual jokes. Also, each death is unique, which is a nice aspect for these movies.

All in all, this is a solid movie. Better than a lot of the ones I’ve slogged through for this, One of the best Slasher films, and if I did a hall of fame for these movies, I’d say this is a solid contender for it. So the Thanksgiving/April Fool’s Day tag team is coming in hot: 1-0 so far.

Report card:
Runtime: An hour and a half.
Acting: Well above average.
Effects: Pretty good for the time.
Violence: Human on human.
Dead Townsfolk: An astounding number.
Gun Use: Not really.
Gore: Kind of goofy wounds.
Creepy? No.
Monster Type? A person.
Monster Ick Factor: No.
Funny? Yes, very much so, and intentionally.
Nudity: No.
Pet Death: No.
Pacing: Really good.