Well, I had to expand the definitions for the Bug movies, to include Slugs. But it was worth it, because despite being pretty gross, this was an irresistible movie with a familiar premise. 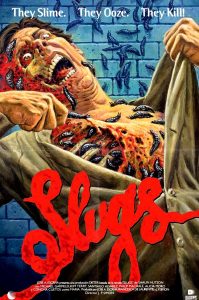 The main gist is that slugs have been mutated by toxic waste (! our first straight-up toxic waste monster), and now they eat.. human flesh! Similar to The Nest, and let’s see how the formula/recipe stacks up here:

We don’t get any yokels, but instead get irritating teenagers and one bum. Interestingly, while we get the couple screwing then dying, we also get the very rare “Good Girl” dying — a girl who explicitly does not want to put out is also killed. I can’t think of another movie where that happens so obviously.

This is a fun movie, but as I mentioned, it is pretty gross. It has a good amount of what I’d consider gore, including eye-gore galore. There’s also a bit of brief nudity mixed in with the gore, which adds a layer to the icky feeling of it. The nudity includes full female nudity, dude-butt, balls, and near-asshole, so it’s especially explicit despite being brief. There’s a definite yikes factor to that scene, so careful watching this with parents/kids/preachers.

The acting is a little weird, but that may be the odd dubbing. I thought for a bit I was duped into watching a foreign language movie badly dubbed, but their lips synch up mostly with the English words they’re saying. It just feels like the audio was wrecked and re-recorded later or something. The pacing is also good but with a hit toward the end despite having a measured number of slug-attacks and not really going too long without seeing the slimy monsters.

But over-all, this is a fun B-movie. It’s not the best movie I’ve seen in this set, but it pulls the Bugs and Slugs movies ahead of the Water Monster movies, 3-1 to 2-2. I’d probably rank the good Bug/Slug set The Nest, Slugs, Forbidden World. This isn’t an indictment of the Water Monster types — the two good Water Monster movies are really great. Slithis and Barracuda just really sucked. Next week I’ll be back with the first of our four Summer Activity movies, and we’ll see if Summer Activities can dethrone Bug movies.

Report card:
Runtime: An hour twenty-nine.
Acting: Good if you can get past the audio.
Effects: Pretty good.
Violence: Some.
Dead Townsfolk: The slugs kill eleven people, including the rare “Good Girl” death.
Gun Use: No.
Gore: Yes, a lot.
Creepy? Not really.
Monster Type? Toxic Waste Slugs
Monster Ick Factor: I wrote “GROSS” in my notes, so…
Funny? Not really.
Nudity: Full female, dude-butt, and balls.
Pet Death: Not onscreen.
Pacing: Decent, stuttering at the end.