This is definitely one of the most favored summer activities of the Boomer generation: summer camps. Seriously, Boomers made a lot of movies about summer camps, glamorizing a lot of things that just didn’t often happen. But this movie is a cult icon, so how does it stack up? 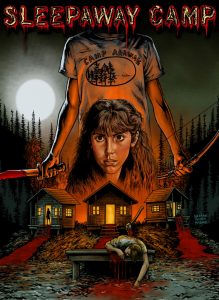 Now, we have to throw out our old formula for this movie, but what do we have that almost fits? Well:

Well, that kind of feels like home. This movie is a slow burn, with very few kills in the beginning and some weird effects around flashbacks and stuff to explain the situation/killer. There’s also a lot of weird teen on teen bullying that would make me want to stuff someone in a trashcan, too.

They don’t rely a lot on effects, they don’t rely a lot on gore. Mostly the movie shambles along building narrative and trying to confuse you about who the killer is. It also illustrates pretty well that people used to be a lot weirder. The acting is either on (Mel, a few of the campers), or 100% off (most of the exaggerated bullies), and I can’t think of who to blame for that. Some of the bullies are just one-dimensional as hell.

This isn’t a great movie, and it might not even be a good movie. But it’s not a bad movie, and it has a pretty sweet twist that is often missing from these sort of movies. If you haven’t seen it, and haven’t heard what happens, it is definitely worth seeing if a summer camp slasher is your sort of movie. That’s definitely my sort of movie, and I was rooting for the killer to collect a few more scalps before the end.

Solid B+ movie, in its own genre. That said, I don’t have to watch it again, so…

Report card:
Runtime: An hour twenty-eight minutes.
Acting: Very hit or miss. A lot of miss.
Effects: There aren’t many.
Violence: Person on person.
Dead TownsfolkCampers: Six on-screen killed by the killer, one question mark, and three implied killings.
Gun Use: None.
Gore: Not really, a comical severed head.
Creepy? No.
Monster Type? Human
Monster Ick Factor: No.
Funny? Some of it is.
Nudity: More dude-butt than a gay bar, and one ding-dong.
Pet Death: No.
Pacing: It’s a slower paced movie.