Because I can’t finish watching Rana, Screamers, or this other shitty movie whose name I forgot. 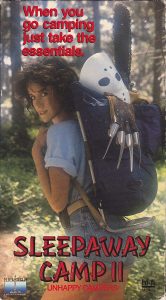 Seriously, I looked long and hard for a decent water-monster movie that was also available on either a free service (Tubi, Pluto) or one of the other services I pay for (Amazon + some channels, Netflix, Hulu), and I came up short. After that failed I decided to look into the Activities movies, and decided to hit our first sequel to a movie already in this list: Sleepaway Camp II. I’ve done a done of Friday the 13th reviews, and I didn’t like Slumber Party Massacre enough to sit through the second one.

I think I made the right choice. While I enjoy the Friday the 13th movies, there’s something to be said for reserving them for future series’. Also, this was a great movie, bringing Activities up to 4-0-1. The biggest drop off from the previous movie is that there isn’t a wit of mystery about who the killer is this time. It’s laid out in one of the first scenes after the narrative device to re-tell the last movie.

They took some hints from other popular slashers here (and made homage to them, too), with some more interesting kills than the last go ’round. Our evil camp counselor Angela is slicing and dicing, but also drowning (in the single grossest kill that comes to mind from any movie), burning (ick), and in all other ways murdering the bad kids. Well, she starts out on the bad kids.

Like a good slasher, they also leave themselves room for a sequel.

All that said, this movie is a little gorey and a lot gross. There’s just a lot of ick to the way some of the kills go down, so keep that in mind. There’s also an abundant number of topless scenes in this movie, mostly contained to the first half or so. Keep that in mind when watching B-movies with your kids, parents, or preacher. The effects themselves keep up, and the acting is on the whole a grade better than the last movie in the series.

This is a solid B- movie. It’s exactly what it sets out to be, and that makes it very entertaining. As long as you can buy the incompetence of everyone for letting this go on so long, anyway.

Report card:
Runtime: An hour twenty.
Acting: Decent.
Effects: Good where they’re used.
Violence: Very much, human on human.
Dead TownsfolkCampers: Seventeen campers/counselors/owner, one question mark, and a weird old lady. (Also, the narrative retelling of the last movie ups that kill count to “around 30.”)
Gun Use: Not that I recall.
Gore: Yes.
Creepy? No.
Monster Type? Angela.
Monster Ick Factor: Not Angela, but the kills.
Funny? Yes.
Nudity: Topless female nudity.
Pet Death: No.
Pacing: Decent, we never have to wait long for a bully to get it.