This movie is garbage.

For my summer bug and water-monster movies, I’ve decided to do six of each if I can find six tolerable movies of each. Then I’ll find a seventh movie from whichever one is the best set of movies. This makes the fourth water-monster movie so far, and right now the tally is tied 2-2 on whether they’re good (Piranha, Humanoids from the Deep), or bad (Barracuda, Slithis). Not looking good for water monsters. 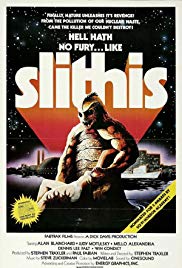 There is some confusion about the title, because the results were split pretty evenly down the middle when I was looking for the cover. That’s fitting. All right, before we get to my general notes, let’s talk about the “formula” or “recipe” we’ve been hitting for all of these environmental-style horror movies:

– We’ve got some sort of human activity making something natural into a killer (nuclear waste)
– The company involved denies involvement.
– There’s a corrupt government figure (the cartoonish police chief)

We’re missing the small town, dependent on the commercial entity bit, there aren’t yokels (but there are winos instead!), and we don’t really have the couple having sex within arm’s reach of water to infuriate the creature.

Above I referred to the police chief as cartoonish. Everyone in this movie seems to be acting like they’re not being filmed, but they’re voice actors for a horrible children’s cartoon. The police chief reminded me of the bad guy from the Smurfs, and the lead actor seemed like a goofy weirdo the entire movie. The main black character was a stereotype, but I’m not sure if it was a black stereotype or a pirate stereotype because he was so weird about everything he said.

This movie makes one of the same mistakes Barracuda made — it spends way too much time on the bullshit people looking into what’s up, and not enough time on the titular monster. Seriously, we see it like three times, which is stupid given that they built the rubber suit the guy is wearing. Also, toward the end a character says, “Time hasn’t gone slow, it’s stopped.” Because he was watching this bore-fest, too.

I’m not sure I’m ready to say this is as bad as Barracuda. Mostly because at least the monster killed more people than other people did (seriously, that was atrocious). Also, because of the cartoonish acting I’m not sure this wasn’t meant as a goof on these types of movies. It’s so ridiculous and fake I can’t tell if they’re joking.

This is a D movie.

Who's got the sweetest disposition? One guess, guess who?  Who never never starts an argument? Who never shows a bit of temperament? Who's never wrong, but always right? Who'd never dream of starting a fight?  Who gets stuck, with all the bad luck?  No one... but Donald Duck! ”
~Donald Duck theme