The last of the non-fiction podcasts, before I hit the fiction ones for a bit: Bill Bur’s Monday Morning Podcast. 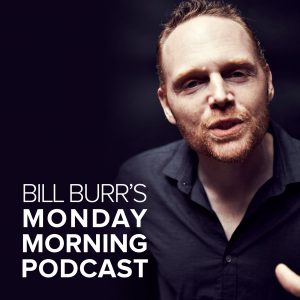 Like Joe Rogan, Bill Burr has been one of my favorite of his generation of comedians for years now. There’s been a good crop of people who have come about and brought around a second golden age of stand-up, bringing it to highs we haven’t seen since the eighties. Burr is one of the top comedians in the business, and so his semi-random podcast is always worth a listen.

He even makes the ads worth listening to. (“Ziiiiip!”)

The topic is usually just whatever is going on, and whatever Bill feels like rambling about. He occasionally has guests (more frequently on the Thursday edition), and they’re almost always comedians. I’ll be honest, those can be a little less fun than Bill just going off on a rant for forty-five minutes, but sometimes it’s nice to change the pace. (“… Recroootah!”)

Bill seems like he’s been a grumpy old man for a century sometimes when he rants or gets mad about something, and sometimes that makes it even funnier as he grasps to master the topic — he’s funny when he’s impatient.

As I said, he’s one of the top comedians of his generation, and having a free podcast once or twice a week is a pretty sweet deal. He usually keeps it somewhat short — around an hour on Monday, less on Thursday — so there’s not an over-abundance of Bill to wade through. It’s just the right amount of Bill’s humor, with enough variety to keep it fresh.