This movie isn’t great. It isn’t actively awful, but it isn’t really much of a horror movie or even a B-movie. The cover is a lie, too — there’s nothing about them preying on human flesh, like the roaches in our last bug movie. What a letdown this was. That said, I think most of the “let down” feeling is because I thought it would be something it isn’t. 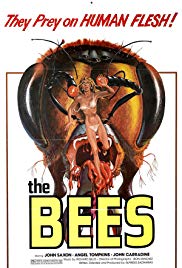 One thing it does better than some of the movies: the bees are featured in nearly every scene. Something it does worse: so is the weird, loud 1970s three-note “theme” song. Du-da-DAAH! The musical choices in this movie were questionable, to be sure.

We do have our recipe: the meddling scientists (which in the case of killer bees, is true), the government incompetence (this time the Carter Administration), greedy corporations. We get international yokels as the movie starts out in South America with their flavor of yokel, and we end up with a weird cowboy paying boys to catch bees so he can make them sting his leg. I’m not kidding.

For part of the movie I thought we were going to be treated to a different angle, and it was going to focus on the conspiring nutjobs who make the natural thing (bees) into killers. But the movie isn’t quite sure what it wants to be. When they designed the cover art they wanted it to be a Slasher about bees (Stinger instead of Slasher?), when they started they wanted to be a horror story about bees getting riotous and dangerous. About the middle of the way through the movie they wanted to be a political thriller/mystery. By the last ten minutes they turned into an environmental wank about how bad we are.

Ironically, the bees haven’t risen up since 1978, but we’ve decimated their populations.

The indecision about what the movie wants to be hurts it more than anything else. It hurts the pacing, it hurts the acting. The bees don’t really eat people. They just sting them because people are fucking irritating. After seeing this movie, I agree with the bees.

This is without question a bad movie. It isn’t the worst movie I’ve seen doing this (I can’t take that throne from Barracuda yet). But it is bad. Which means so far water monster movies are 2-2 and bug movies are 1-1. With six movies left in total, it could go either way. I’m not really holding my breath though.

Report card:
Runtime: An hour thirty-one.
Acting: Above average mostly.
Effects: Not really.
Violence: Bees and people killing bees and people.
Dead Townsfolk: Hundreds.
Gun Use: No.
Gore: No.
Creepy? No.
Monster Type? Bees, politicians, and the script.
Monster Ick Factor: No.
Funny? No.
Nudity: No.
Pet Death: Not onscreen or implied heavily. Livestock though.
Pacing: It drags because it isn’t sure what it is.