On with the fiction, to one of the categories of fiction I tend to enjoy a lot more now that I’m a little older: The stuff set in the real world. Maybe it’s over ten years of being into hardboiled and film noir, but I used to absolutely be turned off by stuff like urban fantasy (this is hilarious to me now given that the Dresden Files are probably my favorite book series). I wanted a totally made up world with totally made up rules. Now? I like this world with modified rules. 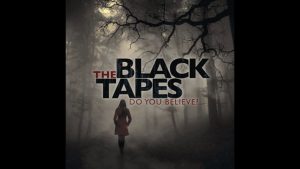 The idea of doing a “found footage” podcast is a particularly tough one, in some ways: while we could just as easily find audio as video, it’s a lot harder to do without any sort of visuals. There has to be a narration device to help push it along, to provide context. This is sort of that, but mostly focused on the narration device: Alex Reagan comes to learn about Dr. Richard Strand’s “Black Tapes”. These are supposed evidence of the supernatural he has yet to disprove.

The tapes play an important role in the show, but they aren’t the only focus. A story builds around those tapes, told through the discussions between Alex and the people she interviews (including a lot of Dr. Strand). It’s a great show, with some good creepy build up to it. It’s definitely what I’d label as a “binge listen.” And the show is complete (or, at least so far?), so there’s a definite end…

Sometimes when you start writing one of these, you’re already meh about it. I don’t like writing “bad” reviews (except Seedpeople), and I’m not saying this is one — but there’s some steam taken out of my ship, as it were. I love this podcast, I really do. But if I had any advice for someone about to listen to it, I’d tell them to stop before the last episode. There aren’t a lot of times I’d say that, but this is definitely one of them.

I absolutely hated the last episode. It felt like a huge “screw you” to the fans, moreso than the end of the Sopranos did. But not as much as the end of Game of Thrones, so it’s not the worst ending penned in fiction. I just… it felt like a cheap swerve. I don’t like that. I like the rest of it, the voice acting is great, the world they hint at is great (ok I didn’t care for the fairy thing so much), even the weird intro song is great.

Give it a listen. Stop before the end.