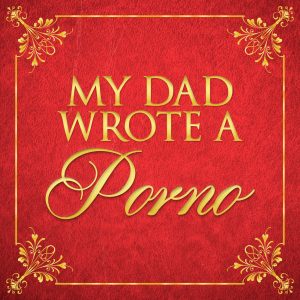 It’s hilarious. As I also mentioned, it has nearly caused me damage. Because I’ve listened to it (on headphones of course) more than once while tooling through a shopping trip. And sometimes the bad anatomy or the sincerely gross verbiage has caused me to either laugh or stop in my tracks. For example, and I cannot remember the exact wording, but a person’s nether-regions were referred to as something along the lines of “sweaty meat.” I was checking out at a Wal-Mart self-check out and I barked out a shocked laugh… I couldn’t help it.

If you in any way enjoy over-the-top humor, or British humor, or gross sex humor, this is right up your alley. And you won’t be alone: they do a Footnotes podcast on Thursdays during the season, and they occasionally have celebrity guests. Including the likes of Elijah Wood. This has become a literal world-wide sensation. In addition to selling out arenas all over the world, they’ve filmed a special for HBO.