Another thing people sometimes do in the summer: rent a cabin on a lake! 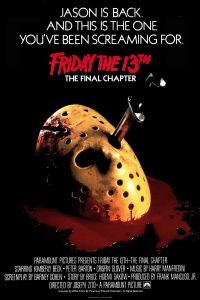 Now, as I have previously mentioned (especially when I reviewed Friday the 13th: Part 3), Friday the 13th are some of the more fun slasher films to me. They don’t take themselves too seriously, they’re supposed to be a little funny, and often the kills are… especially creative.

The basic plot for this one: we’ve got some young annoying kids renting a place, plus a family next door, and throw in a random camping guy looking for revenge on Jason, plus Jason himself, and you’ve got a good time. The kills in this one are all as creative as we’d expect. My absolute favorite is a through-the-door with a double-headed axe.

There’s a lot of blood, but not a lot of gore other than some “fingore” toward the end. No pet deaths as far as I saw, mostly just the people in the cabins. The humor is great, and the dancing about thirty-five minutes in is hilarious.

Oh, this is one of the best Jason-face reveals in the series. His face is fucked up, like that first high-school girl you date because she’ll date you.

Thumbs up, seriously good movie. This might be one of the best in the series, which I think I say all the time for this series. It helps that most of the people who get killed are seriously annoying.

As far as Summer Activities movies go, this one is a winner — putting them at 2-0-1 for the set, and already beating Water Monsters. That means next week will determine our winner over-all between Bugs/Slugs and Summer Activities. Which… well as a preview, one last thing young people like to do in the summer?

Go to the mall.

Report card:
Runtime: An hour thirty-one.
Acting: Average.
Effects: Above average for the genre and year.
Violence: Jason on person.
Dead Townsfolk: Thirteen!
Gun Use: None, Jason breaks the only gun before it is fired.
Gore: Just some fingore.
Creepy? No.
Monster Type? Jason.
Monster Ick Factor: His face is grody.
Funny? Yes, especially the dancing.
Nudity: A ridiculous amount of topless female nudity and some butts. Dude butt warning.
Pet Death: No.
Pacing: This movie felt short it was so fast paced.