I’ve been a big fan of Joe Rogan for quite some time now, ever since seeing some of his standup. Like Adam Carolla, he’s worked on a lot of different entertainment jobs over the years. In addition to his standup and podcast, he’s called UFC matches, he’s acted, and he hosted Fear Factor. The guy has been everywhere, and he seems at home no matter which of these pursuits he’s engaged in. 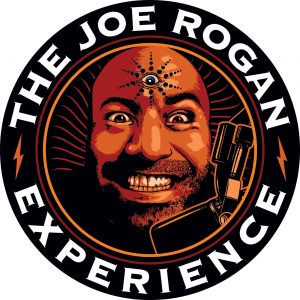 His podcast is unique and interesting because he gets a ton of different people (politicians, business folks, actors, advocates, other comedians) and they talk for a long time. Usually a very long time: most podcasts are over two hours long. Joe is big on interviewing everyone, so he gets into trouble with sensitive people sometimes (he has Alex Jones on a few times, for example).

The sheer variety of people he talks to makes for an interesting line-up: there are scientists discussing crazy out of this world things, and then there’s Scott Adams of Dilbert fame, and then another day Joe might be talking to a presidential candidate. Each interview follows the same sort of long-form, unscripted talk: the show isn’t designed around soundbites and five second answers like talking heads on cable. It’s more in-depth.

There are a few regulars, and the chief among them is Joey Diaz, who always tells absolutely hilarious stories. He also usually has a lot of time to talk to Joe, so they can go on for a long time. But it’s usually worth listening to for the sheer comedy of it. There are also a few frequent topics: Joe likes to talk about chimpanzees and he also likes to talk about DMT and weed.

One big downside is trying to keep up with the number of podcasts, given their length.

Joe’s easy going nature and open-minded ability to talk to just about anyone make for some good listening, though. And the variety of guests and topics, along with the in-depth nature the discussions can hit, make for a great podcast.