One thing people sometimes do in the summer? They have sleepovers instead of just sleepaway camp. 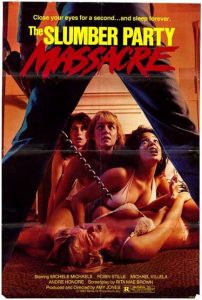 Now, I wasn’t sure about this movie at first, so I gave the Slumber Part Massacre Wikipedia page a read. Apparently this movie series (there are three) was exclusively directed by women, and this one was also written by a woman. Also, it was apparently written originally as a parody, and then shot as a straight movie, so it’s got bits that are meant to be funny that might seem unintentional. Okay, fair enough.

Our killer this time is a loose psychopath, and the protagonists are a bunch of irritating teenagers. We don’t really get any part of the formula — no one has sex and then dies, there’s no one covering anything up.

This movie has something of a cult following, but something about it felt off to me. I can’t quite put my finger on it. It’s better than our bad movies so far, but I’m not sure that it rises to the level of our good movies, either. Right now I’d say Summer Activities are at 1-0-1. I think this movie lost something straddling the parody/straight slasher line. Also, the acting was average for a B-movie.

There’s gore, mostly off-screen, but some pretty notable eye-gore toward the latter half of the film. There’s nudity, mostly front-loaded in the opening minutes, which felt forced. It’s a pretty high bar for a slasher movie to have nudity that is worth calling “forced”. My biggest problem with the movie, though, was the near-constant screaming of the victims. It was loud, and usually unrealistic/bad acting.

This movie is meh. I’m not motivated to see the sequels based on it, but that’s okay, because we’ve got other summer activities left to see.