The first of our holiday-themed horror movies, and the first in the Halloween set of movies. This one starts out with a very Halloween-appropriate opening credits scene. It also starts out letting us know that most of our cast are absolutely obnoxious dickbags. Seriously, they introduce four of the future dead teens with scenes that immediately make them hard to like. 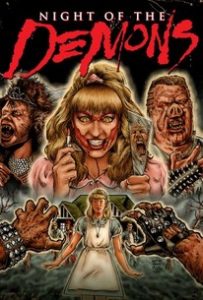 Two horror tropes enter this movie, but only one walks out, and I won’t say which one: the good girl virgin is the final girl, and the black guy dies first. One of those tropes gets twisted pretty hard. But on to the movie itself: we’ve got a lot of annoying, irritating teens and a few less annoying ones. Sooner or later most of them will prove themselves to be at least sort of annoying. Partly this is the audio — several actresses’ voices are off-putting and I think it’s the dubbing.

The make-up and special effects in this one actually kind of shine: I was impressed. Unfortunately this carries over into some pretty icky gore at times, but I’m on the record as being especially opposed to eye-gore and the like. Possibly the worst and/or goofiest effect in the whole movie is the weird insect-looking demon head we thankfully only see a handful of times. It was not scary. It was comedic.

The pacing is a little slow, and they sprinkle in a bit of comedy to make it go faster but it sort of drags. We don’t get our first definite kill until 52 minutes in, and that isn’t confirmed for another four minutes — and that entire part of the movie is book-ended with most of the nudity all at once. It was like they wrote 51 minutes of set-up before realizing they had an hour and a half runtime and it was time to cram stuff in. It’s forgivable, but it’s also notable.

Over-all, this movie is above average despite my complaining about pacing and gore. It’s a Win for Halloween, which may be the only holiday that actually has four movies in our sample. It remains to be seen if having a varied tag-team will help the other holidays overcome what is the undisputed king of horror days.

Report card:
Runtime: An hour and a half.
Acting: Over-done to above average.
Effects: Impressive.
Violence: Demon on human.
Dead Townsfolk: Nine.
Gun Use: No.
Gore: Yes, including tongue and eye-gore.
Creepy? No.
Monster Type? A demon that kind of looks like a mole cricket.
Monster Ick Factor: Yes.
Funny? Yes, intentionally.
Nudity: Full female nudity: some of everything, a lot of topless nudity.
Pet Death: No.
Pacing: This movie is kind of slow paced until the end.