This movie is supposed to be a horror/black comedy. It has some darkly funny parts, but… I don’t know that it has enough to qualify for the slash. It takes place all on Halloween, so it’s our second Halloween (the holiday, not series) movie. 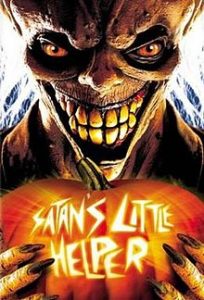 I didn’t like this one. It seemed promising and kind of funny at the start, with a decent enough premise, but I just didn’t feel it. The second half killed the good will the first half built up. First of all, the most obnoxious characters never get killed, which is a major no-no in a slasher-type movie. Annoying is more deadly than having sex in the woods.

The beginning, again, a lot of promise. Some funny dark humor. The people mostly seemed normal except this mom is way into Halloween. Look, I’m into Halloween and this lady was annoyingly over the top. Yikes. The kid was a freakshow, too, and I would not have tolerated him being that weird for that long as a parent. Yikes 2. The college daughter and her boyfriend were the first normal main characters. Too many caricatures in the movie.

The villain has a great mask and I got the gimmick.

The schtick just did not hold up for an hour and forty minutes. That’s about all I got. Halloween movies are at 1-1 right now, with two to go on the card.

I'm writing.  If you are not bleeding or on fire, do not disturb. ”
~Old AIM Away Status