Get this, and get it straight! Crime is a sucker’s road and those who travel it end up in the gutter, the prison, or the grave. There’s no other end… but they never learn!

On this blog and through my writing I’ve shown an interest in some older fashion forms of entertainment. I like noir and hard-boiled detective stories. Other than reading those old stories and watching those old movies there remains one other venue of the era: old radio shows. And there were plenty, stretching from the earliest days of radio right through the golden age. Where to start, what to look for next? 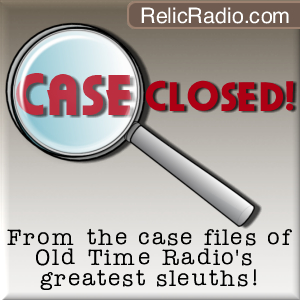 Enter Relic Radio, and their detective-centric podcast, Case Closed!. Every episode is two old time detective or police procedural shows put together for around an hour of great entertainment. They’ve got episodes of Sam Spade, The Adventures of Philip Marlowe, Sherlock Holmes, Dragnet, and several other pretty interesting shows.

My absolute favorite across all of the Relic Radio/Old Time Radio shows I’ve listened to is The Adventures of Philip Marlowe. I discovered it through this website, and couldn’t be happier. Each episode follows Phil on a small case (under a half hour, without the commercials that would have aired during or wrapping the show), and it starts with the quote at the top of the post. It helps that the actor, Gerald Mohr, is absolutely born for the role. His voice, his ability to be Marlowe, is spot on. There’s nothing better than a week with a Marlowe.

I’m also particularly fond of Richard Diamond, but almost every one of the shows they put out is very good and quite entertaining. I’m more of a hardboiled (or even… soft-boiled?) fan than the procedural type, but even those are a nice break sometimes.

Like written fiction, audio fiction has some limitations. It’s not quite as strict (you can use tone of voice, for example), but it is vastly more limited than a visual story. Between that and the general attitudes of the time (a lot of these are from the 40s and 50s), there’s also a limit on the sex, violence, and language — even most of the violence has to take place “off-screen.” This, and the time limits for radio shows, results in a concentrated story that is usually very entertaining and often surprisingly funny.